A heel spur (or osteophyte) is a small bony growth or collection of bony growths on the back or underside of the heel. They may or may not cause pain, and patients often confuse heel spurs with a related condition known as plantar fasciitis, inflammation of the band of tissue that stretches from the ball of the foot to the heel, forming the arch. Many people have bone spurs without ever knowing it, and about 70 percent of patients with plantar fasciitis who do have discomfort will also be found to have a heel spur when observed via X-ray. It is likely that a bone spur forms as the body tries to repair itself from repeated injury by laying down extra bone at the site of trauma. Plantar fasciitis is typically another result of such trauma. Heel spurs are most often seen in middle-aged men and women, but can be found in all age groups.

Diseases such as arthritis may lead to chronic inflammation in the tissue surrounding the heel and over time this can lead to the accumulation of calcium deposits. Ankylosing spondylitis, for example, is one particular form of arthritis that frequently develops along with heel spurs. This condition can damage bones all over the body and even lead to the fusion of spinal vertebrae. 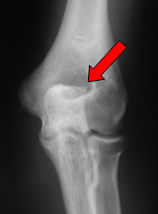 The spur itself is not painful, however, if it is sharp and pointed it can poke into soft tissue surrounding the spur itself. As the bone spur irritates the tissue, inflammation and bruising can occur leading to heel pain. Heel spurs can affect your ability to do your usual work and/or activities, and can also trap and irritate the nerves in your heel area. They can change the way you walk, and can lead to knee, hip and low back injuries. If severe, they may require medical intervention.

Diagnosis of a heel spur can be done with an x-ray, which will be able to reveal the bony spur. Normally, it occurs where the plantar fascia connects to the heel bone. When the plantar fascia ligament is pulled excessively it begins to pull away from the heel bone. When this excessive pulling occurs, it causes the body to respond by depositing calcium in the injured area, resulting in the formation of the bone spur. The Plantar fascia ligament is a fibrous band of connective tissue running between the heel bone and the ball of the foot. This structure maintains the arch of the foot and distributes weight along the foot as we walk. However, due to the stress that this ligament must endure, it can easily become damaged which commonly occurs along with heel spurs.

There are various ways to treat heel spurs. The first is to rest and apply ice to the afflicted area. Shoe inserts and night splints can also treat plantar fasciitis, and in turn, heels spurs. Unless you have stomach sensitivities, you may want to consider taking over-the-counter anti-inflammatory medication such as naprosyn to lower the swelling. A physical therapist can recommend gentle exercises and stretches to relax the tissue around the heel bone to relieve the tension. Even with these treatments, a stubborn heel spur may not go away. A physical therapist may decide to inject cortisone into the area to decrease inflammation, but that can cause other problems such as plantar fascial rupture and fat pad atrophy. Extracorporeal shock wave therapy is also an option, which uses energy pulses to apply microtrauma around the heel spur. Surgery is also an option but is not suggested unless the heel spur lasts more than a year. To prevent heel spurs from returning, shoe inserts can relieve the pressure on the plantar fascia. Also continue the recommended stretches and exercises.

When chronic heel pain fails to respond to conservative treatment, surgical treatment may be necessary. Heel surgery can provide relief of pain and restore mobility. The type of procedure used is based on examination and usually consists of releasing the excessive tightness of the plantar fascia, called a plantar fascia release. Depending on the presence of excess bony build up, the procedure may or may not include removal of heel spurs. Similar to other surgical interventions, there are various modifications and surgical enhancements regarding surgery of the heel.

To prevent this condition, wearing shoes with proper arches and support is very important. Proper stretching is always a necessity, especially when there is an increase in activities or a change in running technique. It is not recommended to attempt working through the pain, as this can change a mild case of heel spurs and plantar fascitis into a long lasting and painful episode of this condition.

In the setting of plantar fasciitis, heel spurs are most often seen in middle-aged men and women, but can be found in all age groups. The heel spur itself is not thought to be the primary cause of pain, rather inflammation and irritation of the plantar fascia is thought to be the primary problem. A heel spur diagnosis is made when an x-ray shows a hook of bone protruding from the bottom of the foot at the point where the plantar fascia is attached to the heel bone.

Common causes of this bone spur in the heel are repetitive trauma to the base of the heel, obesity, poor walking/running technique, poorly fitting shoes, or hereditary conditions.

Heel spur and plantar fasciitis pain usually begins in the bottom of the heel, and frequently radiates into the arch. At times, however, the pain may be felt only in the arch. The pain is most intense when first standing, after any period of rest. Most people with this problem experience their greatest pain in the morning, with the first few steps after sleeping. After several minutes of walking, the pain usually becomes less intense and may disappear completely, only to return later with prolonged walking or standing. If a nerve is irritated due to the swollen plantar fascia, this pain may radiate into the ankle. In the early stages of Heel Spurs and Plantar Fasciitis, the pain will usually subside quickly with getting off of the foot and resting. As the disease progresses, it may take longer periods of time for the pain to subside.

A Diagnosis of Heel Spur Syndrome is a very common reason for having heel pain. Heel pain may be due to other types of conditions such as tendonitis, Haglund’s Deformity, Stress Fracture, Tarsal Tunnel Syndrome, or low back problems. A more common condition in children is Sever’s Disease. The diagnosis is usually made with a combination of x-ray examination and symptoms.

FIRST, Reduce the acute pain. This is done by a combination of several things; injection of a synthetic relative of cortisone into the heel, a prescription of anti-inflammatory pills to reduce inflammation, physical therapy and a special heel pad. About 50% of the time, these treatments will permanently relieve the pain. In the other 50%, the pain becomes recurrent, and the treatment proceeds to Stage II. SECOND, Recurrent, painful heel spur is caused by the tug and pull of the plantar fascia ligament on the heel bone with each step. When the pain is recurrent, arch supports are made to prevent sagging of the arch. The arch supports are custom-made according to the size and shape of the feet. This prevents the arch from sagging and the ligament from tugging and pulling on the heel bone. The inflammation and pain eventually go away as the first phase of treatment is continued along with the arch supports, although the spur itself remains. THIRD, Surgery to remove the spur is possible and is usually done as Day Surgery.

Surgery to correct for heel spur syndrome is a common procedure which releases plantar fascia partially from its attachment to the calcaneous (heel bone). This part of the surgery is called a plantar fasciotomy due to the fact the fascia is cut. This is most often done through an open procedure as any heel spur or bursa can be removed at the same time. If the spur is not removed during the surgery, it will probably be just as successful, as the large spur is not the true problem. Some physicians use an endoscopic approach (EPF) where a small camera aids the physician during surgery with typically smaller incisions on each side of your foot.

If you have not yet developed this condition, you can take steps to protect yourself from it. Most importantly, make it a rule to wear properly fitted footwear. Avoid shoes that have become worn down in the heel, and don’t choose shoes that cause you to walk in an abnormal fashion. Maintaining a healthy weight will ensure that undue pressure isn’t being put on the ligaments, tendons and bones of your feet. If your job requires a great deal of time on your feet, or if you exercise regularly, be sure to balance periods of activity with periods of rest for your feet.